Sensebit is introducing a new version of the popular FLEX sensor, with 10 times the battery life of the previous version! The new FLEX sensor features a cutting edge energy management system that enables the sensor to collect accurate vehicle-by-vehicle data for up to 10 years. As with the previous version, no roadside equipment is needed and the data is uploaded directly to the cloud. Designing a solid measurement system has never before been this easy. 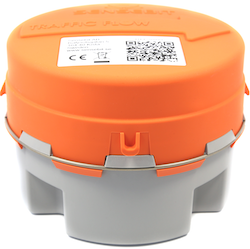 Traffic data collection has always been about the compromise between cost and number of days measured. In most cases, an ideal setup would be continuous measurements on all points of interest. However, due to the high cost of establishing a permanent measurement location, this is very seldom a viable option. A measurement system is therefore usually a combination of permanent and temporary measurement locations, resulting in unreliable and sometimes outdated numbers.

The FLEX sensor was introduced to the market in 2015 and quickly became a popular solution for collecting more data on locations that were previously measured with temporary equipment, such as ambulating radar or pneumatic tubes. The fact that the FLEX sensor does not require any roadside equipment and no external power, drastically lowered costs compared to alternatives such as inductive loops or permanent radars. However, the limitation of the battery still meant users could not measure continuously over longer periods than one year.

In 2017, our R&D-team set their focus on this issue. The goal was to give our customers the ability to establish a permanent measurement location, at the same cost and with the same data accuracy as the FLEX sensor. To achieve this, the energy consumption had to be lowered several times over, without decreasing the accuracy of the data. During the last three years, every component, every design decision, and every line of code on the FLEX sensor has been closely reviewed, revised and tested. This work, combined with improvements in energy efficiency in the components from many of our providers, has made it possible to now release a new version of the FLEX sensor, that enables 10 years of continuous data collection without a decrease in data quality, streamed directly to the cloud!

So, it’s time to rethink the old truth about permanent measurement locations being too expensive for large scale use and have a look at what can be done with this new technology. Check out the new FLEX, and combine it with Trafficweb for a complete traffic measurement solution.

Contact us, or your local Sensebit distributor for more information and ordering details.